Department of Rural Development and Board of SENEC congratulate Governor Dr. Erwin Proell on 20 Years’ Anniversary 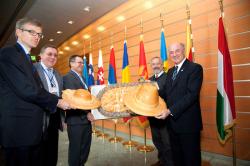 Exactly 20 years ago, on October 22, 1992, Dr. Erwin Proell was for the first time elected Governor of Lower Austria, then still in the Lower Austrian Government Quarter in the Herrengasse in Vienna, and thus succeeded Siegfried Ludwig. Up to now, only Eduard Wallnoefer was Governor (of Tyrol) for a longer time than Dr. Erwin Proell, namely for 24 years.
In the course of the 22nd Meeting of governmental leaders of the Working Community of the Danube Regions, baker Mayor Michael Singraber, in his function as chairman of SENEC (Soil and Bioenergy Network of European Countries) handed over a baked piece of art and congratulated on this anniversary, together with Chairman Franz Rybaczek, Christian Steiner, Grad. Eng., and Dr. Erwin Szlezak from the Department of Rural Development.
The SENEC Association acts as lead partner in some sustainability projects in the Danube region, and has cooperated essentially in the development and organization of the Lower Austrian soil protection campaign by Governor Dr. Erwin Proell and Regional Minister Dr. Stephan Pernkopf. This campaign is now being transferred to the Danube region, corresponding to the aims of the EU Strategy for the Danube Region (action: to raise awareness about soil protection).
Photo: © Lower Austrian Governmental Authorities / Department of Rural Development / Nadja Meister